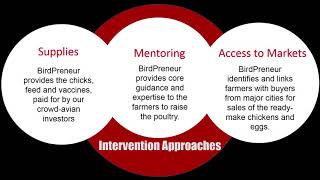 A few years back, Bill Gates said that if he were poor, he’d grow chickens to earn his way out of poverty.  It sounds like a good plan.  It’s a plan being followed by tens of millions of smallholder farmers in Nigeria.  Only it’s a plan with three flaws.

First, it takes money to grow chickens.  You have to feed the chickens for months before they are ready for market.  You have to vaccinate them as chicks to avoid common plagues that wipe out flocks.  You have to hire veterinarians when other ailments come by.  Because of this, most farmers have a handful or a few dozen chickens, not thousands.

Second, it takes knowledge to grow a thousand chickens at once.  Growing a few chickens in a pen next to a farm is easy. Growing thousands or tens of thousands is much more difficult.  Small farmers in rural Nigeria (or anyone in Africa) don’t have access to this knowledge with no mentors to hand it down from farmer to farmer.  And even if they did, the fences and feeders and barn to grow a thousand chickens costs yet more money small farmers don’t have.

Third, even when those other two hurdles are leaped, rural farmers have no place to sell a thousand chickens.  Local markets can’t handle a thousand chickens, as other farmers can’t afford to buy a whole chicken for dinner.  Urban markets have the demand for millions of chickens, but rural farmers have no easy way to connect with urban processors.

Fixing these flaws requires some innovation.  One such innovation is the business model of Birdpreneur, an 18-month-old start-up in Nigeria which solves all three of these problems for rural smallholder farmers.

This is a win-win-win, with the profits from production shared three ways: 40% to the farmers, 40% to the investors, and 20% to Birdpreneur.

And it works, with over 150,000 chickens raised and sold in the first 18 months and thousands more in production now while impacting 1000 rural farmers.

Birdpreneur’s goal is to scale quickly across Africa, impacting the lives of 1M farmers in the next 10 years.