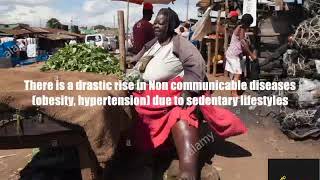 The Product/Solution:BONGA Power bikes and kits convert mechanical energy generated when pedaling into electrical energy and stores them in a battery and can be used instantaneously or later for lighting, charging phones, power fans and energy saving television etc. Pedaling the bike for 30 mins produces electricity that will light 7 light bulbs for 12 hours, charge phones, turn on a fan, and power TV etc. BONGA power bike combines physical activity with electricity generation. We have also developed a hybrid that harnesses solar energy using solar panels during the day and stores it in the same battery as the bike. In Senegal, we are using the power kits to produce electricity from the mechanical rotation of the wheels of house carts which can also be attached or adapted to any bicycle (movable or stationary) to produce electricity. It uses the same dynamo principle and technology. As the cart works (move) throughout the day transporting goods and persons, the mechanical energy from the rotation of the wheels is converted into electrical energy and stored in a battery.

The classic power bike is stationary exercise bike designed with the technology that help produce and stores electricity from the effort of the user.The virtual bike has everything that the classic version has in addition to a 15 inch touch screen consul loaded with pre-recorded virtual spinning classes from well trained tutors choreographed and designed to help the user(s) reach their energy production and fitness goals during each exercise/ spinning session.The hybrid system (solar and dynamo) is turning secondary schools in rural and semi-urban areas into mini grid centers. The advantage it has over solar is that, electricity can be produced at anytime of the day and the amount of electricity produced can be increased without necessarily buying more bikes, we just have to increase the amount of pedaling time on the same bike. We are creating spinning studios in schools with 30 to 50 power bikes and solar-paneled roof tops (depending on the school size and their energy needs). During sports or physical education periods, students do indoor sports (spinning) while adding on average about 10,000W (10kw) of electrical power to the battery daily. We have also designed customized rechargeable battery packs (power banks) and rechargeable bulbs that can provide light energy saving light for 7hours.

Benefits of the Innovation

Light for students to study at night.In the rural communities in African countries, almost all the students go back home after school without any assurance that they will use bright clean light from a bulb to study at night. Schools with our spinning labs (hybrid of solar and BONGA power bikes) produces enough electrical energy that charges every student’s battery pack (power bank). Some of the electricity is used in the school’s office, science / computer laboratories and to cool class rooms with fans. In boarding schools, the electricity produced is used to light up the dormitories, reading halls, security bulbs etc, while in day schools, students take their charged battery packs home, connect it to their energy saving bulbs and use the light at night for studies. With less than $20US per annum per student (house hold), he/she is sure of having clean bright light at night everyday to study throughout the academic year and to charge phones. With BONGA power kit, owners of horse carts are benefitting from an additional added value to their trade. They are using the electricity produced by the cart during the day to light up their homes at night and some sell or exchange the excess energy to nearby homes or businesses in need of light at night for cash or other goods/ services. Some individuals buy the power bikes and use it home as a complimentary electricity source and/ or backup (our towns and cities have frequent long hours of power cuts). Others use the power kit made for bicycles to attach to already existing bicycles (stationary or the rare wheel of bicycle) in order to pedal-light-up their homes or businesses.

Health and fitness.Our users experience great improvements in their health and fitness goals, hence, reducing their risk of suffering from non-communicable diseases like obesity, diabetes etc. Engaging our children and sit-home mothers to pedal often helps in fighting child and adult obesity respectively and increases their performance in other aspects of life. Conventional fitness equipments consumes electricity but with our power bikes, we pedal-light-up homes, schools, gyms, charging stations for events etc.

Education.Africans needs to learn the value of a watt. Our spinning labs in schools serves as an educational tool/ platform for students to learn and understand topics related to electricity, conservation of energy, green energy, mechanics, welding, fitness, human biology, etc. The BONGA read and ride program in a school has tripled the objective of increasing reading, increasing physical activity, and creating an interest in STEM through its energy-generating technology. Some of our pre-recorded classes are very educative and in future, we will be demonstrating topics in biology, urbanization, civic education etc using spinning as an illustration tool with electricity production as targeted output.

Mental health.Creating a reward for time spent or watt hours created is a good way to help people combine a nice workout with a sense of accomplishment and fun. The most pleasant surprise has been how students have commended on their sense of achievement. Our users now seem to understand the benefits of mental and physical wellness. Most of our users belief more in hard work as a pre-requisite to success. They believe they can achieve anything if they set out clear objectives, work hard and receive coaching as exemplified by the power bike, (using the bike, they set clear objectives on the amount of watts they want to produce, work hard by pedaling vigorously at various speed and resistance, being advised and encouraged by the virtual coach while leading them to achieve their desired results). Like eating vegetables and other healthy foods, exercise and physical movements are good habits to be formed in order to maintain a healthy weight. Adding electricity production to it, which is a serious need, makes it indirectly obligatory which eventually leads to good habits and more clean electricity production.

Job creation.At the beginning, we were manufacturing the entire bike from the scrap of old cars, bicycles, motorcycles etc. We created jobs in welding/ assembling, electrical, painting, and marketing and distribution, installation and maintenance. More jobs will soon be created in the research and development department in order to develop more educative and fun-filled contents for the virtual bikes and our spinning labs in schools.

Environment.A considerable amount of energy can be conserved by harnessing some of the energy being “wasted” by gym lovers during exercise, horse carts etc. As an alternative source of clean energy especially for communities in the rural and semi urban areas characterized by frequent power cuts, the use of this technology is helping in reducing our carbon footprint hence, preserving the environment.