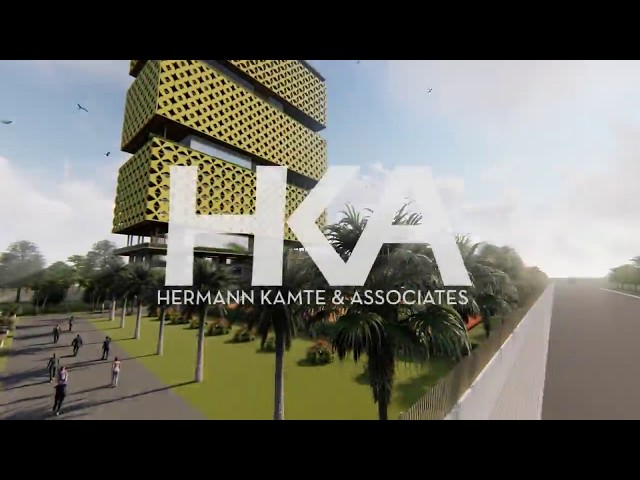 ﻿﻿﻿﻿ABOUT: An Alternative To The City's Reliance On Less Sustainable Materials

Lagos's Wooden Tower is a residential tall timber in Lagos (Nigeria) and "The ﬁrst Wooden Skyscraper proposed in Africa.”  As a Winner of the Inaugural WAFX Prize (Cultural Identity), it was reveals among the World's most Forward-Looking Concepts at the World Architecture Festival 2017.

Lagos is the most populate city in Africa and represents a big deal for architects. City consists of 16 million inhabitants. Situated in the heart of Ikory, the most popular and the richest residential site of Nigeria, Lagos’s tower is the unique wooden structure.

The proposed research is focus on a Wooden Residential Tall Building to solve the urgent need of housing. The aim is to make a transformation that matter. Wood is Marketable, serviceable, biodegradable, affordable, sustainable and ecological. The studied technology is an entire wooden skeleton with the Laminated Veneer Lumber (LVL) system for load-bearing and a non-load bearing structure.

The old existing building is located on the highbrow Bourdillon Road with picturesque vegetation. The existing “Abebe Court” is a complex of four structures. It consists of 4 bedrooms and 3 apartments spread over 4 floors.  The tower is organized in three blocks above an existing structure. The blocks are connected to each other by gathering space and sports or recreational activities for residents. From the bottom to the top, there are housing units with 1, 2, 3 and 4 bedrooms.

The greenery in the space creates beauty, sensitivity, naturalness, aesthetics and comfort for the residents. With its microclimate effect, it is a giant lung in the urban space which helps to reduce the surrounding pollution. The terraces allow you to enjoy the sky and the city, the beautiful landscape. The roof is a landscaped and living space; it has a restaurant and a garden.

The envelope high lights Yoruba culture with their massive presence in the heart of Lagos. Inspiration comes from the history of Edo, Yoruba. The building envelope is as sunscreen, beyond its cultural significance.

The Role Of Timber

Wood is an alternative to the city’s reliance on less sustainable materials. Wood is a wonderful material freely offered by nature and the fingerprint of Mother Nature into our artificial buildings. It is urgent to solved the housing crisis and the lack of public facilities which is at their peak. The number of poorly housed, homeless or people without access to public services is quickly rising in an uncontrolled evolution of cities.

The  aim  of  the project  is  to  imagine:  how  the  roofs  of  today  can  be transformed into the plots of tomorrow?

The first step of our approached was to work about the evolution  of  urbanization  and  population  growing  by creating a new form of urban fabric.

The    second    step    was    to    understand    cultural appearance in spite the status to be the most populate cities  in  Africa.

The  final  step  was  to  focus  on  the  development  of wood construction Technic into a landscape dominated by concrete.