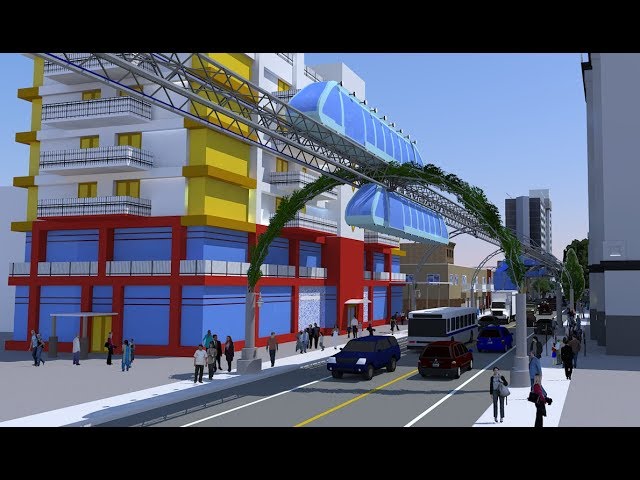 Esteemed Judges, Mass transit has made little to no progress for nearly a century - that is the speed, comfort, frequency and accessibility has remained nearly the same since the early days of the first streetcars and buses and subways. Elevated mass transit holds the solution for a comprehensive cure to the ills of mass transit (traffic, noise, pollution, land intensive and more) However there is a missing link to why elevated transit is very limited to date - in spite of valuable advantages (free from traffic, easy to automate, little to no land required and more). The cTrain model contains the "missing link" via a number of features that eliminate or sufficiently reduce the impediments that have to date stopped elevated transit from providing a comprehensive solution to public transport. Criteria for comprehensive mass transit: 1. Accessibility from within an acceptable walking distance 2. Frequency at a reasonable wait times 3. Speed at acceptable levels 4. Comfort and privacy 5. Effective cost / short time of (modular), construction / complete coverage over all major streets, roads avenues. 6. Emissions and noise free mass powered by renewable energy Design principles The cTrain concept is an automated mass transit mode of elevated light weight trains with seating room only. The cTrain is designed to minimize the visual impact on the urban landscape via the following features: Minimal height of trains (via sitting room only) + Minimal width m helps bring minimal weight and minimally visible supporting structures as well as Minimal thickness of tracks - travel both above and below the tracks further reduces visual impact & allows the cTrain to be positioned furthest away from either side of the built environment. At about 10 to12 seats placed in sequence (with two passengers per row), the cTrain has a low height and width for each vehicle to help minimize weight as well as visual impact on the urban landscape. The low weight of the trains also simplifies the size and cost of supporting structures as well as their visual impact. The trains are designed to move above as well as below the rails. Compared to monorails or elevated trains the cTrain is about half the height and half the width which makes it far less visually invasive on the urban landscape. The cTrain rails are held by arched supporting structures planted on the sidewalks designed to be no more visually invasive than an average concrete pole. Most of the weight of a cTrain is supported by the arches rather than the rails. The thickness of the rails is a function of the distance between the supporting arches. Having at least one supporting arch at any time allows for relatively thin rails. The suggested design is for vertically oval rails at dimensions of (3x4 inches) though R&D will be needed to optimize the frequency of the arches and the thickness of the rails. Advancements in material science may allow for parts of the supporting structures to be built from transparent or semi-transparent materials to further reduce visual impact. The capacity per train need not be high as the CTrain is designed to be built over every major street and avenue which will eliminate clustering. The image below shows a station an intersection at of two avenues with two lanes in each direction. Station is larger at intersections to accommodate passengers from both cTrain directions, otherwise a station is smaller if not at an intersection. The goal is to the cTrain service over every main street or avenue in a city so as to have sufficient coverage to have access from anywhere within a few blocks - in other words to have the equivalent of a "subway" stop at every major intersection. Further/exponential benefits: Improved worker productivity –less stress, less time wasted in traffic less financial strain from car costs etc. Greater, equity and employment– improved service to and from underserved areas would help both employers and workers and reduce poverty. Improved health – lower pollution, fewer accidents, less aggravation from traffic Improved freight transportation efficiency - fewer cars on the roads during rush hours Lower public roads expenditures - on road repairs and and mass transit Climate Change Mitigation Higher revenues to local and state governments - from capitalizing one newly available land and buildings Expected cost is the lowest of all transit models to date - under $2m per km. Please see articles about the cTrain in publications such as AMERICAN SOCIETY OF CIVIL ENGINEERS: The Indian EXPRESS Boston Globe at https://ctrain.net/news Sincerely, Emil Jacob